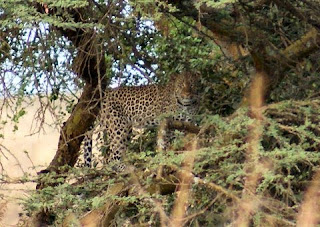 Yumi Yamane, a zoologist from Kyoto University is researching leopards in NNP, specifically looking at the conservation of these elusive cats and at interaction between leopards and people living outside the Park.

Will Knocker reports that Yumi trapped and collared 2 female leopards in the Park in January 2009 and has been trying to keep up with them through radio signals & GPS readings showing their movements since then. KWS further reports a female with 3 cubs in the Langata Forest area of Nairobi National Park.