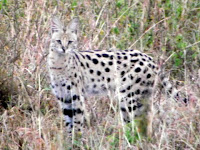 Lions are the most famous of Nairobi Nat. Park’s cats and their increasing numbers now are a refreshing change from the declines in lion numbers in other parts of East Africa. There are now over 30 lions in the Nairobi NP ecosystem and at the same time there are other, more elusive cats that frequent the Park and its environs. Ned Knocker took this wonderful photo of a serval cat in June. Also, caracal, civet and African wild-cats are present, but equally hard to spot. So many lions now inhabit the Park, that cheetahs have largely been pushed out of the Park into the open pastoral lands in the Park’s wildlife dispersal area — another good reason for protecting these vital private lands.