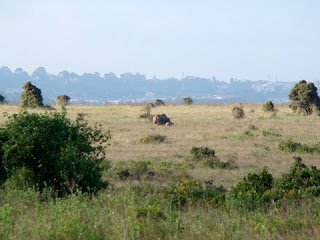 To the right, in the distance, a cow rhino & calf graze on the plain below Impala Observation Point showing the spectacular rhino habit of Nairobi National Park. Will Knocker tells us that there are now at least 40 Black rhinos in NNP and 11 Northern White rhinos that have been translocated in from Lake Nakuru Park. Despite some bad news coming out of South Africa and stories of an upsurge in rhino poaching in other parts of Kenya, here in the Nairobi Nat. Park, a long-time sanctuary for the East African sub-species of Black (Browse) rhino -micheallii- things are going very well. The rhino calf pictured in this beautiful photo by Patrick Bourgeix is just one of many in the park, spelling out a bright future for this wondrous species.